No End to Islamist Violence in Sight 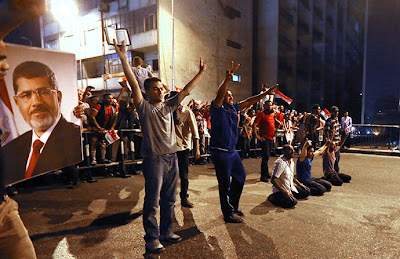 Even though the Muslim Brotherhood leaders are losing ground and Egyptian public support, they are still insisting on unrealistic demands. While they have no upper hands, the Muslim Brotherhood are demanding to sack military leaders, reinstate the deposed president Morsi, and restore the constitution Morsi pushed through.


While the Muslim Brotherhood trying to send a message to the world that they won’t accept what they call a military coup that ousted Morsi, they are paying a high price in human lives that they lose every time they take their show of support for Morsi to the street.


With all these successes under their belt, the Muslim brotherhood didn’t care about the Egyptian people's security, economy, or the demands they made during the 2011 revolution. Morsi was only interested in what the Muslim Brotherhood's supreme guide, Mohamed Badie, advised him to do every step of the way during his short-lived one year presidency.


Although Morsi was very popular among his party and group members, he wasn’t very popular on the street. People mocked Morsi and made fun of his many gaffes on Egyptian TV and during his trips to other country.


Mohamed Morsi, who was removed from the presidency by the military amid nationwide protests against him is still in custody and accused of many crimes, such as inciting violence and of failing to protect protesters who were killed outside the presidential palace in El-Etahadya.

The Muslim Brotherhood rallies people to go out and protest and sacrifice themselves for the selfish goals of increasing the group's own political power, and restoring their control over Egypt again. However I think Egyptian people are becoming smarter every day, and with no end to Islamist violence in sight, Egyptians are getting more familiar with Muslim brotherhood rhetoric, and their truly violent nature.
Posted by Unknown at 2:30 PM