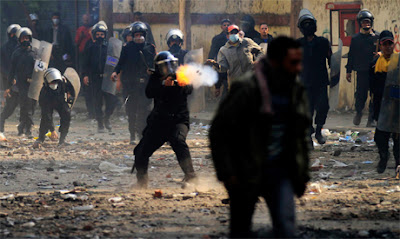 Two years ago in Cairo, in November of 2011, I participated in a huge march from the Haram, in the Giza area, which is a suburb of Cairo, all the way to Tahrir Square: probably about nine miles. Here, ten months earlier, the revolution had emerged to remove Hosni Mubarak from power.

I was filming and photographing the crowd as it grew larger and larger, every block we walked, every neighbourhood we crossed. There are no words that could express my feelings on that day. Egyptians mobilizing and organizing to call on the Supreme Council of the Armed Forces (SCAF) to stop the violence, and  make the demands of the revolution come to life.

Many of the protesters knew that the SCAF could attack them. The previous month the SCAF had carried out an attack on peaceful protesters in front of the Egyptian State TV building. The attack resulted in the deaths of several protesters and wounding of many others. But that didn’t stop the protesters from participating this day.

Happily no violence took place.  However the following day in the late afternoon the state police attacked a group of Occupy Tahrir protesters, who were determined to stay till their demands were met. Most of those were wounded people from the revolution, and families of people who lost their loved ones during the revolution and other clashes that followed.

The state police attacked the peaceful protesters who were camping in Tahrir, and killed five people within half an hour. The attack was not anticipated by the protesters. In no time, the word got out through social media and cell phones about what was happening in Tahrir. The activists responded right away to defend the Occupy Tahrir people. After a few hours they managed to force the state police to retreat to their headquarters a few blocks away.


What stood out in my memory is that the protesters asked for help from the Muslim Brotherhood and the Salafis, and both groups declined to lend a hand, probably out of fear of losing in the upcoming parliamentary election.


These attacks sparked the week-long Mohamed Mahmoud clashes. I’m proud that i was there to document what happened. Here is some of the video that I shot during the clashes.


Mohamed Mahmoud clashes in NOV 2011 from Khaled Sayed on Vimeo.