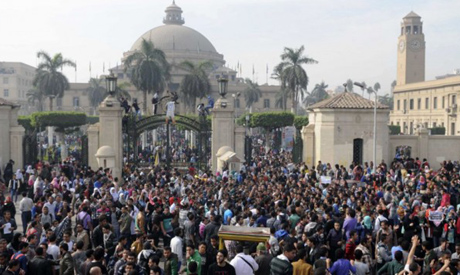 The new anti-protest law backlash is giving pro-Morsi protesters a reason to start taking to the street again, this time in universities all over Egypt.


In recent weeks in the light of new anti protest law, many activists have called for a demonstration to express their discontent with the new law. Twenty-seven women and men who took part in a demonstration outside the upper house of parliament were arrested. They were later released in the middle of the desert outside Cairo. These protests are not against the government per-se: they are against the new law.


On the other hand, there are opportunists who are against the government and want to re-install the ousted Islamist president Morsi. These are mostly Egyptians who oppose the interim government backed by army chief General Abdel Fattah al-Sisi. They identify themselves by carrying banners that say, “Sisi is a murderer,” or they display a symbol of four fingers, which was adopted by Morsi’s Muslim Brotherhood supporters after July, 2013.


These are the major players on the protest stage right now; one side calling for freedom from government regulations, and the other side is calling for Morsi to return to the presidency. In hopes of finding a new audience to their cause, the pro-Morsi have been protesting in universities all over Egypt.


In November the cabinet issued a decision allowing police to enter university campuses without prior permission if facilities or students were under threat. Previously, police had been banned from campuses unless specifically invited by university authorities.

If this law passes we will have both groups fighting each other in the street and at universities. This would make the situation more confusing and it will be interesting to see what would happen next.
Posted by Unknown at 9:27 PM