Why We Shouldn't Strike Syria 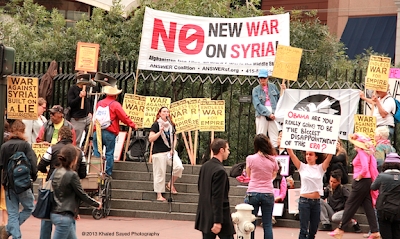 If you agree with the US strike on Syria as a way to save Syria and support the Syrian people, you have to ask a very important question: Is Iraq better off today than before the US invasion?


To answer this question we have to examine the facts. Since the US invasion in Iraq, the documented civilian deaths from violence have been 114,406 – 125,376. Yes the US did manage to remove Saddam, but the country is divided more than ever. The violence increased since the invasion, and if you ask most Iraqis, they would have much preferred Sadaam to the mess that they are in right now.

Is dictatorship is bad? Yes, of course it is bad. But we have to take a hard look at what kind of positive gains the Iraqis have realized after removing Saddam.

Syria has many issues, but a US air strike won't fix these problems and removing Assad because the US thinks that he used chemical weapons on his own people is not a proven reason. It has been common knowledge that many videos have surfaced online with rebels admitting using they used the chemical weapons that were found to have been used in Syria by mistake, and confirming that they got the weapons from Saudi Arabia and Qatar. However the US chooses to ignore that possibility, and build a case to justify the strike on Syria. It feels awfully similar to the way George W. Bush justified the Iraq war after the 9/11 attack, which Saddam had nothing to do with it.

The idea of an air strike on Syria isn't about helping the Syrian people. If it were, the US would have intervened when the Syrian civil war started in 2011. But the current strike is simply about the US and its own interests. If the US cared about people who get attacked with chemical weapons, we have to ask why didn’t they respond when Israel used white phosphorus in Gaza civilian areas?

The likely reason that the US didn’t comment on the Israeli attacks is because in 2004 the US used the same chemicals in civilian areas in Fallujah, Iraq. Both the US and Israel made the same claim; that white phosphorus was not being used as a chemical weapon, but only, "to create smokescreens or illuminate targets." Additionally, the US government supplied Israel with the white phosphorus which was used in the attack.

We can also go back to the Reagan era, when the White House looked the other way as chemical weapons were used in the Iran Iraq war the 1980s. More than a million people were killed on both sides of the of the conflict under the watch of the US.

Recently declassified documents from that time indicate that not only did the US government know that Saddam had these weapons, but “conveyed the location of the Iranian troops to Iraq, fully aware that Saddam’s military would attack with chemical weapons, including sarin gas.”

President Reagan also remained silent during the Al-Anfal campaign, in which Saddam used poison gas against the Kurdish population in Northern Iraq to put down a revolt against his rule. In what has later been called a genocide, more than 100,000 men, women, and children were killed; nearly 100 times more than in the attack that took place outside of Damascus last month.

Given US history, I’m not sure why they care to go after Assad for using chemical weapons. They must have a another reason. The civil war in Syria has been going on for two years, and Assad has committed terrible war crimes, including bombing civilians and targeting specific religious groups. The death toll over the two years is very high. If the US is going after him because the use of chemical weapons is a red line, it is a poor reason.

If the US is against the use of chemical weapons, they need to start here at home, by banning all chemical weapons production, and making It illegal for American companies to produce and sell them, nationally or internationally. The US also needs to destroy the chemical weapons the already have, to set an example.

The bottom line is that the Iraqi people aren’t better off because of the Iraq war. They are in a worse situation since the US invasion. The country can’t recover, the civil war there has not stopped, and the terror attacks are happening systematically, with no end in sight.