June 30 showed the amazing unity among the Egyptian people, who took to the streets all over Egypt to hold the Morsi administration accountable for its failure to meet their demands. The largest single organized protest in human history was a direct result of a year of Muslim Brotherhood rule, with Morsi as a president.

Walking in a rally, hearing people chanting “the people want to topple the regime,” reminded me of what happened on Jan 25 2011; the initial revolution days, when people were chanting the same slogan to end the Mubarak regime.  We still trying to answer the question of whether what happened on June 30 is a second wind for the revolution, or a military coup.


Let’s examine the situation. After winning the presidential election, Morsi tried to control the country and gather all kinds of power for himself and his Muslim Brotherhood party. The Muslim Brotherhood tried to become the sole political player in Egypt, ignoring and suppressing any opposition. But in the one year of their regime, Egypt suffered electric, gas, and water shortages, along with rapidly increasing inflation. In the end, the people were feeling worse than they felt under Mubarak's regime. And Morsi ended up losing everything in only one year.


On the other hand, the military has been in power no matter who was in the presidential chair. And their power was not always beneficial to the will of the people. Even in the recent past, over 1200 civilians have been tried before military courts, and repressive tactics were used by the military in 2012 against protesters, including killing protesters.
But when Morsi came to power, the military worked with the Muslim Brotherhood, and put them in the forefront, so it would appear as if the military were not responsible for anything that might happen. They also made sure that no one would be allowed to review the military's financial affairs, their factories, and their assets. The constitution that Morsi rushed into place in just 48 hours late last year, with the support of the military, included terms that secured that deal.

Morsi did shuffle some military heads in 2012, but the military has been and will remain the strongest player in the Egyptian political scene. The military succeeded in controlling what happened on June 30, just as they did on Feb 11, 2011. For the military, it was not about the freedom and democracy the people were demanding, or supporting the activists who are working hard to bring that to Egypt. It was about protecting their interests in the huge economy they created in Egypt.

As with the start of the revolution in 2011, it was important on June 30, 2013 for the military to convince the people that the military's heroic intervention was crucial to removing Morsi, perhaps even more so than the millions of people who showed up on the streets all over Egypt. Many people discouraged any chanting against the military during the June 30 rallies on the basis that "the enemy of my enemy is my friend." This was helped by another slogan that was popular in the 2011 revolution: “The people and the army, one hand."

At the same time, the popular opposition to Morsi grew stronger every time he failed to listen to people's demands. So the people were encouraged to rally around the military, and forget the military's past mistakes. The military was smart to focus on gaining the people's love and support during the June 30 protests. They used a variety of clever tactics such as securing the safety of the protesters, overseeing and even orchestrating the rallies and celebrations, and throwing flags to the crowd from military helicopters overhead to show that they were backing the people's cause.

I've started to notice that the state police are also using a similar strategy, and are gaining some popularity on the streets from the people who have already forgotten what the police used to be like. The police force in Egypt is best known for detaining innocent people, torturing them, and then killing them. The classic example is Khaled Said, whose death at the hands of the police was one of the key issues in the initial 2011 revolution. Like the military, the police are being praised as heroes, without any accountability for what the did to thousands of protesters before. Sadly, people forget too easily that the state police force is still the same one that left Egypt lawless and without security for two years. That state police is being transformed in the minds of the people from a tool that regimes used to terrorise protesters, to a bunch of heroes and revolution protectors.

The awful truth is that both the Military and the Police served Morsi when it was beneficial for them, and they will serve the future regime, without regard to the will of the people.

We do have to remember that the Egyptian military helped us to get rid of Morsi. However we are facing new challenges. With the popular support of the people, the military could quickly return to repressing popular opinion and getting rid of anyone in the future who might challenge or disagree with them.

Egyptians are starting to realize that, without a true democratic process, the ballot box is just a different way for the few elites to control the masses. Our responsibility is to keep watching, and to use the power of organized peaceful protest to remove anyone who doesn’t serve the interests of the people. 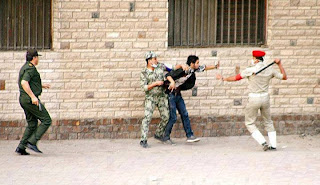 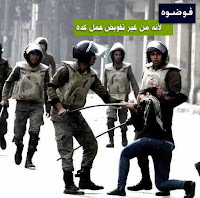