While I was going through customs to return to the USA, the customs officer asked me if I participated in any of the rallies on June 30:

Me: Yes, of course. It was beautiful, and I took tons of photos.

Customs Officer: There's a lot of talk about hating Obama and the USA over there now.

Me: Many people disagree with some of the US policies in the middle east, and its hypocrisy when it comes to democracy. It wasn’t a coup by the way

Customs Officer: (raising his eyebrows) What was it then?

Me: It was the people rejecting a failed president. They called on their military to remove him, since Morsi wasn’t doing a good job.

Customs Officer: (in a sarcastic tone) Well I guess you know more than CNN, since you were there.

Me: Yes, I was there. What happened on June 30 was a peaceful demonstration.

Customs Officer: Well if it was so peaceful, and it wasn't a coup, what do you call what happened between the people and the army a few days ago?

Me: That was between the military and the Muslim Brotherhood. They attacked the army, and the army defended itself. When was the last time an angry mob directly attacked the police in the USA without the police responding?

For the record, what happened on July 8 was that a bunch of Morsi supporters, upset over the removal of Morsi on June 30, attacked the military guard outside the presidential palace in the early hours of the morning. The military tried to disperse the crowd with announcements, tear gas, and finally a few warning shots. But the crowd didn't back down. Then some people in the crowd pulled out weapons and fired directly on the army. So of course the army fired back. As a result, there were casualties and injuries to both the Muslim Brotherhood protesters and the military.

It's impressive how the mainstream media can make up a story, and convince so many people to believe it. 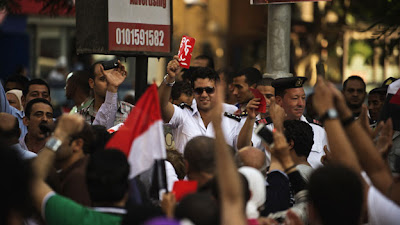