The Argument Over Morsi's Legitimacy as President 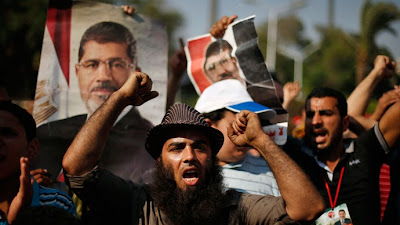 It has been over two weeks since the Egyptian military ousted former president Morsi. However his supporters still claim that Morsi has to come back and stay for three more years. The pro-Morsi people are still clinging to the notion of Morsi's legitimacy as the elected president of Egypt. But I think they are misunderstanding the term legitimacy.

Lets explore this legitimacy they are holding on to. Morsi won the election, and let's leave all the bickering aside about whether that election was manipulated, and grant for the moment that he did win. He received over 13 millions votes last year out of 50 million registered voters in the final round of the election, against Ahmed Shafiq, a representative of the party of ousted leader Hosni Mubarak.

A year later, the Egyptian people didn’t see any positive changes. In addition, their needs seemed to be ignored by Mr. Morsi and his Freedom and Justice Party. All Morsi was interested in over the last year was getting his friends from the Muslim Brotherhood placed into positions as ministers and heads of government, whether they were qualified or not.

Political activists took notice of the bad job Morsi was doing, and they started thinking of ways to show what the Egyptian people felt about Morsi’s performance over the one year he had been in office. They created the Rebel campaign, which invited people to have a second chance to vote in a way, now that they knew whom they were dealing with. People were asked to sign a petition to remove Morsi from office. And over 22 millions people signed the petition in less than two months. Then they took to the street on June 30, which was the deadline the campaign had established to collect as many signatures as they could. People were asked to come out and participate in a peaceful protest at Tahrir Square and the Etihadya presidential palace in Heliopolis to let Morsi know how they felt.

And the people responded. They signed the paper, and they showed up on June 30 in the mIllions all around the country.  In all, 33 million people took to the streets, and chanted a slogan showing their deep disappointment in Morsi and his administration. They also called for his resignation.

Of course people in power tend to act the same, so like his predecessor Hosni Mubarak, Morsi chose to ignore the whole thing. It wasn't even covered on the official media initially. But the Egyptian people didn’t back down easily. For three days they took to the street, peacefully asking Morsi to leave.

The Egyptian military was watching closely as the situation escalated. When they saw how massive the protest had become, they asked the Morsi administration to issue some response to the protests that were taking place everywhere in Egypt. They gave Morsi 48 hours to address the Egyptian people. When Morsi finally addressed the crowds for an hour, he offered no concession. Morsi said that he would hold on to his legitimacy, and he wouldn’t be leaving before the end of his four-year term.

But Morsi was never elected to serve a four-year term. He used his position to force that into the constitution. So everything else about Morsi and his behavior as president aside, I think that the pro-Morsi people are mistaken about the question of Morsi's legitimacy after the end of his one-year interim term. 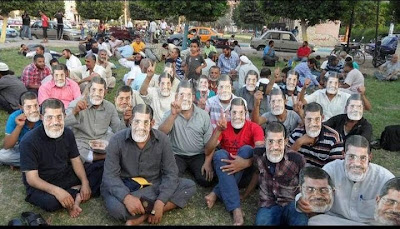