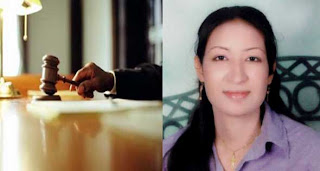 Dimyana Obeid Abd A-Nour is an elementary school teacher in Luxor, in upper Egypt. The parents of three of her ten year old students accused her of insulting Islam, and encouraging their kids to leave Islam. On that basis, Dimyana was arrested, and has been in jail for more than two weeks. Her bail is set at LE 20,000.


This week I flew with a friend from a human rights NGO to film with her family and friends in Luxor, to cover her case.


Dimyana‘s case isn’t unfamiliar one, there are many other cases with people accused of similar crimes under the current law, and often persecuted for the same alleged crime. But Dimyana's story is a little different. She is being charged on the basis of an accusation by three ten years old kids in one of her classes, although the rest of her class testified that she has done nothing wrong.


There is a Salafi push to make an example out of her. The Salfists have been front and center of this issue, rallying people and spreading lies about Dimyana’s case.

I met with the School principal where Dimyana was substituting when the alleged event took place. He spoke freely, and said that she is a good teacher. As far as he was concerned, the whole event was over after he himself investigated the complaints from the students' parents. The principal said that the three kids' recollection of her actions were not clear, and not consistent with one another. He also confirmed that the rest of Dimyana’s class didn’t hear her insulting the Islam, or remember her preaching to the Christian religion, as has been claimed.

The principal said that it is his opinion that Dimyana couldn’t have done any of these things. "She is from Luxor," he told me. "She was brought up in our city, and knows the culture and life here. She is not an outsider."

I also met with Dimyana’s family, who are most affected by this unfortunate events. They all believe that Dimyana is being persecuted for blasphemy she didn’t commit for political reasons. "Dimyana couldn’t have done such a thing," her sister said. "She was very excited to have a teaching job, which she was looking for, but now she is emotionally devastated from the whole thing."

Dimyana’s father beside himself. He can’t believe what is happening to his little girl, and he insists on staying, and not moving out of Luxor, no matter the outcome of his doughter's case. He said, "We never had problem between Muslim and Christian before. Our Muslim neighbors are very sad for our daughter, and wish her well."

Because Dimyana is in jail, I was unable to meet with her. The authorities say they are holding her for her own safety. But the fact that she remains in jail is becoming part of the publicity against her. The Islamists want people to believe that Dimyana wouldn't still be in jail if she weren't guilty of something.

The court will be deciding Dimyana’s case on June 4, and we all hope that the judge will see that he can’t convict her based on inconsistent testimony by three ten years kids, and ignore the investigation, the director of the school, and the rest of Dimyana’s class.

But the judge is being pressured by very vocal Islamist groups, trying to make an example of this weak case to push their agenda. I hope that the judge won’t give in to the political pressure.