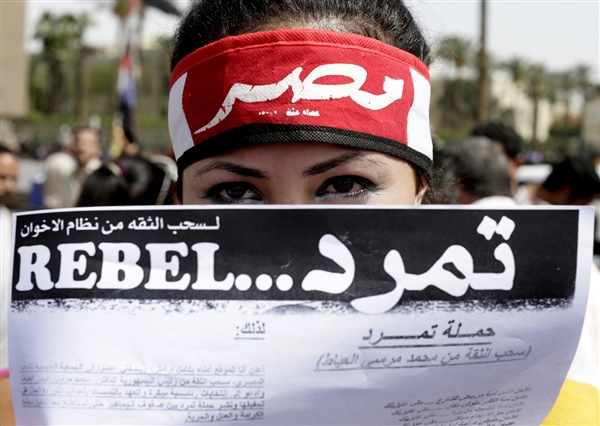 Millions of signatures are being collected on the streets of Egypt to show Morsi how unsatisfied Egyptian people are with the job he is doing, or failing to do.


Morsi allegedly won the presidency with a little over thirteen millions vote out of fifty million registered voters. You might ask why Egyptians voted for him in the first place?  Egyptians were not ready to vote for a president after all that the country had been going through right after the 2011 revolution. But due to the power vacuum that happened with the removal of Hosni Mubarak on Feb 11, 2011, many counter-elite Islamist parties like the Muslim Brotherhood moved in to gain the political power they had been deprived of for over sixty years.

Most of people who voted for Morsi believed in choosing someone other than what they had under Mubarak for years. The preliminary election was full of candidates without organized parties or name recognition, making it difficult for anyone with a new voice to rise up. The field was quickly narrowed down to two options, as people voted either for the Muslim Brotherhood candidate based on their shared religion, or on a name they recognized from their past. In the final election, Morsi faced Ahamed Shafiq, a military men turned businessman who had worked in many high-level positions under Mubarak, and was also a close ally of Mubarak.

So you can see, when Egyptians went out to vote, they had to choose between a member of the old elite, Shafiq, or a Muslim Brotherhood candidate, Morsi. Not exactly the democracy Egyptians had hoped for after a revolution.

Almost a year after Morsi became the new Egyptian president, people have not been happy with his performance or decisions. But Egypt has not been the same. Egyptian people are talking openly about politics in public, and voicing their opinions. Egyptians are no longer afraid of being jailed or persecuted for their opinions.

So they started collecting signatures under a movement called "Rebel" to directly show how deeply disappointed they are in Morsi's job as a post revolution leader. The effort has no formal legal standing, but it is an attempt to demonstrate the scale of the opposition by collecting more signatures opposing Morsi than the number of votes Morsi had when he won the election.

Despite the fact the this rebel campaign is only symbolic, people are very excited to be a part of this campaign. The Rebel document calls for the rejection of Morsi for the following reasons:


Amazingly enough the number of signatures so far already exceeds six million. In the first ten days of the campaign, over two million signature were collected. The Rebel campaign is going strong, with a target date of June 30, when they are hoping to reach fifteen million signatures.

I have a feeling they will reach a much higher number.