Defining Moment in the Egyptian Revolution 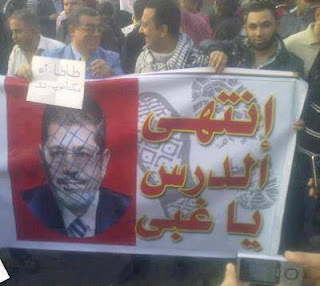 Last Friday June 21 there was a rally for the Morsi supporters. The slogan for the rally was a call for non-violent protest. However the sentiment of the protest was nothing but a call for violence against the Rebel campaign, calling anti-Morsi protesters infidels, and saying they should be terminated.
In the past few weeks, Morsi's actions have done nothing but provoke the Egyptian people to rebel against him, from his lack of any solution the to Ethiopia dam crisis, to his appointment of a member of a terrorist organization responsible for killing tourists in the 90’s to be the governor of  Luxor. Luxor is one of the biggest tourist attractions in Egypt, and contains at least the third of the world artifacts from the ancient world.

The Rebel campaign started last month, hoping to gather 15 Million signatures of people calling for Morsi to be removed from office. However, they collected more than that before the June 30 deadline, showing the depth of disapproval for Morsi’s job as president of Egypt.
Living in the midst of all this, and witnessing the anger and frustration of the people in Cairo, I do believe that Egypt is entering a new session of the revolution. I have not taken any means of transportation without hearing people complain in anger about Morsi.

I was in a minivan where an older women started talking about her support for the Rebel campaign. She asked people if they had signed or not. Most people indicated that they also signed, and would be going to participate in the rally on June 30. Then one passenger got on the van and heard part of the conversation. He said that people in the Rebel campaign are infidels, and they are not good Muslims. The older woman called him a hypocrite, and told him he didn't understand what he was talking about. Then he started defending Morsi, saying that people elected him, and we need to give him time to fix Egypt. The rest of the van was telling him that Morsi is not qualified to run Egypt, and Morsi is only interested in the Muslim Brotherhood agenda.

That scene, of people talking politics is becoming very common. It can be seen anywhere across Egypt, in homes, coffee shops, and on the streets. People are talking about politics, whether they have any genuine knowledge and understanding of the current situation or not. But they are not afraid to voice their opinions.

I do believe that this is what we really gained from the initial revolution on Jan 25, 2011. Under Mubarak, which was a corrupt regime, people seemed removed from politics, and felt that they couldn't do anything to change themselves or the political scene. Now they seem engaged, and are willing to participate in political discussions and rallies.

The new openness about discussing and debating the political future of the country is a good thing for Egypt and the democratic process, no matter what side they are on. 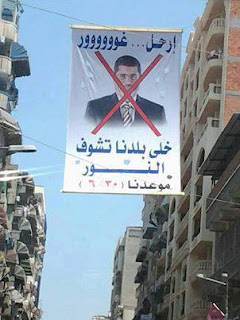 During his presidential campaign
“If people demonstrate asking me to leave power I will.”

“I will treat everyone equally and be a servant of the Egyptian people.”
On 30 June 2012 in Tahrir Square
“Here I am standing between you my people — those who voted for me and those who didn’t — without wearing any bulletproof vest. I don’t fear anyone except Allah.”

“If you think I am a good ruler then help me, and if I act badly so guide me.”

“My people, my family.”
22 November 2012, on issuing his controversial constitutional declaration
“Under the new declaration presidential decisions are immune to any challenges in court. The Constituent Assembly and the Shura Council are protected from judicial dissolution. The president may take any actions necessary to protect the country and the goals of the revolution.”
29 November 2012, before calling for a referendum on the constitution
“We must all hug each other to pass the bottleneck. Everything can be done with love.”
30 January 2013 during a visit to Germany
“Alcohol and gas don’t mix.”
25 March 2013 addressing Islamists at Al-Ittihadiya presidential palace
“Four or five people are conspiring in a narrow alley.”
26 March, addressing the Arab League Summit in Doha
“I will not allow anyone to put their fingers in Egypt. I will cut off any finger that meddles in Egypt… I can see two or three fingers that are meddling.”
11 June statement on the Renaissance Dam crisis
“We will defend each drop of [Nile] water with our blood if necessary.”
Compiled by Reem Leila