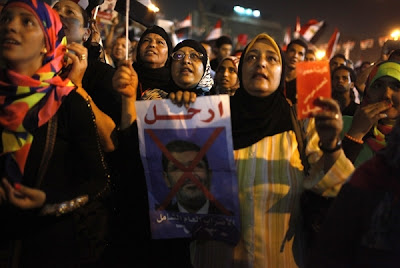 Two years after the initial revolution, Morsi warns of risks from unrest, just like Mubarak did in January 2011. Trying to gain the people's support, Morsi's three-hour speech did nothing but anger people.
During the start of the revolution, before he left office, Mubarak gave a speech that tried to play on people's feeling and get them on his side. It only took him ten minutes to do that, and he divided the the Egyptian people, getting a large number of Egyptians wanting him to stay in office.
It took Morsi three hours to do the same thing; now many people on the streets of Cairo are wishing Mubarak would come back.
From standing in the middle of Tahrir square with thousands of protesters on June 26, during Morsi's speech, I am feeling the frustration and anger of the Egyptian people. After a long speech, Morsi only proved that he is is removed from the reality on the street, and completely unaware of how people suffer or feel. Unfortunately, Morsi speech didn’t not offer any concessions or suggestions of improvements. All his speech did was try to gain police and army supports in upcoming days, as the country braces for the June 30 Rebel protests.
Morsi threatened the opposition and media many times during his long speech. Morsi also accused several judges – by name – of corruption. He asked pointed questions about how Mubarak-era figures had been acquitted by Egypt's court system. Morsi spoke about pseudo-achievements that did not happen during his term. He was delusional to the point of  accusing the people themselves of being responsible for all of Egypt's issues and crises, and blaming them for all the recent political problems.
Morsi failed to take any responsibility for the country's deep political polarization and failed economy. Instead he  blamed all former presidents for all economic and political issues that Egypt faces today.
It's awkward and telling that Morsi of used many of  the same words and phrases that the ousted president ,Hosni Mubarak, often used. Morsi appeared to be speaking about another Egypt, one that does not exist in the real word.
The Egyptian military has moved forces near Egypt's major cities, openly threatening to intervene if Morsi's supporters and opponents cannot find a compromise and avoid bloodshed. The stage is set, as the military seems to be siding with the people against the Islamists who support the Morsi regime.
I do feel like the upcoming days won’t pass by without significant clashes between the Muslim Brotherhood and the rest of the Egyptian people.