Morsi's News From Inside the Bubble 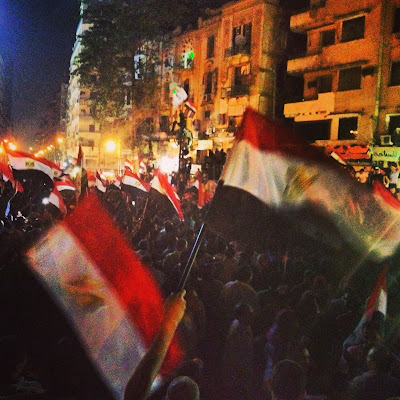 Hours before the Rebel rally on June 30, I was watching channel 25, which is a channel run and managed by the Muslim brotherhood in Egypt.

I know what you're thinking: "Why would you watch this propaganda machine?" Well, as a filmmaker here to document the real effects of the revolution, I wanted to hear their side of the story. Despite how vocal they have been at their own rallies, it has been difficult to find individual representatives of the Muslim Brotherhood who were comfortable sharing their perspectives on video.

However, it seems that their side is just cloud of black smoke without fire. It is sad to hear the Muslim Brotherhood charging people up behind Morsi, and trying to protect Morsi’s legitimacy because they believe that he was fairly elected.

The same lies that were spread about the protesters during the initial January 25, 2011 revolt are still being repeated. The people trying to support the regime claim the protesters are traitors, and that they've accepted money from foreign countries to destroy Egypt. Protesters are up to no good, the Islamists tell us, and want to drive a wedge between Egyptians.

The fact is that the Muslim brotherhood are saying that about protesters at the same time they are encouraging their own followers to commit act of violence, calling protesters non-believers, and stirring up hatred by claiming that they are the enemies of Islam.

the only difference between the rhetoric of Mubarak and the Muslim Brotherhood is that the Muslim brotherhood succeeded in splitting the people, and creating two Egypts: one in which the Muslim Brotherhood has a legitimate claim to power based on faith in Islam, and the rest of Egypt where all the practical problems of day-to-day life still need to be addressed.

Last night I was in Tahrir Square. I have been going there every night for the past three days. I can hardly put into words how I feel while I’m there in the middle of the growing crowd of anti-Morsi protesters. Few words can describe the combined sense of hope, love, and fear of what tomorrow will bring.

Today is June 30, the big day. I’m meeting all of my friends at a metro station, and then we will be walking about a mile to the presidential palace in Heliopolis. For over a month, Muslim brotherhood supporters been threatening protesters, and trying to plant fear in people's minds. But despite the threats and intimidation, I anticipate a huge crowed.

There are more people coming to protest against Morsi and his Muslim Brotherhood than there are supporters of this government. The Rebel campaign claims to have gathered more than 22 million signatures from Egyptians who want Morsi out of office. The police and the military have said they will work to protect the protesters against counter-attacks from the Islamists. But many of the protesters are already launching strikes against the offices of the Muslim Brotherhood.

Officials from the Rebel campaign are advising everyone to go to the rally with their friends, for safety. I’ll be with at least twenty of my friends, all coming together to participate in the rally as a group. With all the attention this protest is getting, I'm still optimistic that it can be peaceful and productive.

The news programs may try to distort reality, but the real story will be out on the streets of Cairo, and all across Egypt, tonight. We should all wish the people of Egypt luck trying to move this country out of its history of dictatorships and leaders who mix religion with politics, and into a new democratic era based on honest and fair elections. 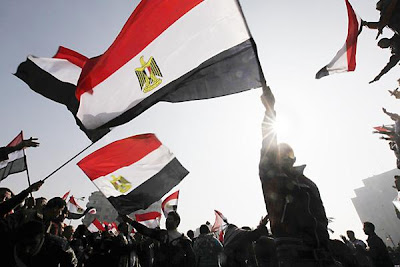