Filming With a Priest (Not!) 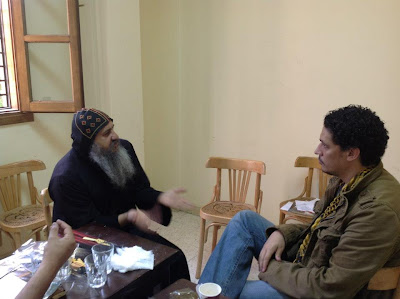 A friend of mine set up an appointment for me to film with priest Yostos today in one of the historical churches in old Cairo. He had originally agreed to work with me. Unfortunately, when I arrived there, he had already changed his mind. However, I enjoyed a long conversation with him. He let me ask him whatever question I wanted, as long as it was off-camera.


He said that these issues have only surfaced recently. Whenever anything happened to a church under the Mubarak regime, it was usually because the Islamist groups wanted to show that Mubarak was losing control. When violence against Christians happens under the current Islamist regime, it happens for political reasons, because they want Muslims and Christians fighting among each other. That way they won't notice the horrible things being done to the country by the regime.


However, when I asked him why churches are the only institutions with state police guarding their doors, his answer was, "They ask to be referred here. They like guarding our churches because we take care of them and we feed them."

I felt like my question wasn't being answered, so I asked again why guards are only seen on churches, and not on mosques or Jewish temples in Egypt. He said that the guards come without any ammunition in their guns, and that if there were any attack on a church, the guards would be the first ones to run.

That still wasn't what I had asked about.

We talked for an hour or so, and I did agree with him about many points. He said that politically Egypt is in a transitional period. We have a lot of issues now because we are trying a different system, but eventually the people of Egypt will work this out.

We talked about a lot of different issues. I left disappointed that our conversation hadn't been filmed. It would have been more interesting to be able to share his ideas with you on video.
Posted by Unknown at 12:12 AM