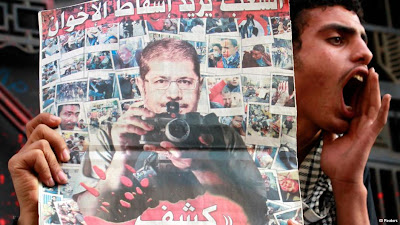 The islamist party, Ikhwan, has been calling for a week of protest since april 19, to cleanse the judiciary system.


You might ask, "Why? Why are the ruling majority protesting to cleanse the judiciary system?"
This is a hard question to answer. It depends on who you ask. Egyptian society is polarized, with political parties, rumours, and discontent with Morsi’s ruling party--and with Morsi himself.


The majority of Egyptians are not even aware of any judiciary system problems. They only notice a problems when they have to go to court for one reason or another. Then they might see evidence of the corrupt system we have in Egypt.

So is there a simple answer to the question why Ikhwan is protesting against the judiciary system? The popular opinion is that Ikhwan wants to replace all the current judges with Ikhwan judges, to put control over all aspects of the regime into their hands.

You might point out that all newly elected presidents try to bring in people from their own party, who share the same views, to make the job of the president easier. That seems like a fair assumption. But what you might not know is that many of the judges have received complaints and cases against Morsi, along with requests to to bring him to justice on many accounts of espionage.

Here's a little background: Morsi was a political prisoner during the popular Egyptian uprising that started on January 25, 2011, and he is very proud of that record. Not only was he in prison on charges of espionage, Morsi was freed on January 28, 2011 by unknown people. That is not the weird part; many prisoners were freed during the revolution to create chaos and unrest, and to intimidate people from leaving their homes.

But Morsi didn’t terrorize anyone when he was freed. The first thing Morsi did, when he was standing right outside of the prison gate, was to call Al Jazeera channel's live broadcast to let them know on air that he was free, and that he was stuck in the middle of the highway between Cairo and Alexandria.

Morsi also mentioned the names of all the people who were freed with him that day, according to Al Jazeera's English translation of the broadcast:

Well the story gets even more bizarre. Starting on January 27, 2011 the whole country had no connectivity. There were no landlines, no cell phone lines, and not even internet for two days.
So with this information, we have more question than answers:

So the case against Morsi is waiting for investigation, and so far it has been delayed. That may be because it is easy to question an individual, but questioning a president is a different story.

In the meantime, the protests by Ikhwan against the judiciary system were the start of the violent clashes in Egypt since April 19. And according to reports on April 20 in Al Ahram Online, over a hundred people were injured in clashes nationwide. Seventeen of the injured were policemen, some of whom were treated for birdshot wounds. Almost forty people have been arrested in connection with Friday’s clashes, accused of everything from damaging property to “terrorizing citizens.”

The people of Egypt need to pay attention to what's happening, before Ikhwan replaces everyone in the entire regime with representatives from one organization.
Posted by Unknown at 5:03 PM