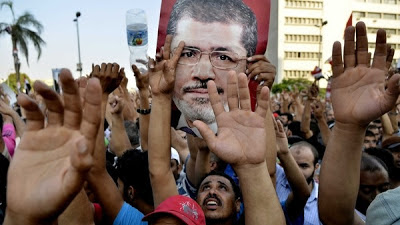 While the whole world is worried about whether what is going on in Egypt is a coup or not coup, the Muslim brotherhood is vowing to bring Morsi back to power over the dead bodies of the Egyptian people.


July 5 was a bloody day in many cities in Egypt, but in Cairo it was just crazy. The Muslim Brotherhood and other Morsi supporters went to have their Friday prayer in the Nasser city mosque. After the long prayer, they marched to the Republican Guard headquarters, where they believed the military were holding Morsi, to free Morsi and install him in power again.

When they got there, the military was on high alert and ready to protect the building. The Morsi supporters turned to attack mode. That's when the military started shooting over their heads to scare them, and disperse the crowd. However the angry mob didn’t seem to be fazed by the military action, and they didn’t leave. So the military shot tear gas to scare them away.

The Islamists keep spreading rumors that the military killed three islamists during these clashes. With the chaos of conflicting reports, these rumors have even made it to the headlines on the BBC. But we have not seen the dead people up to now.

However this wasn’t the only rally in Cairo. Anti Morsi demonstrators also gathered in Tahrir square to show support for the military, and to show that they are content with the decision to get rid of Morsi. This gathering in Tahrir was attacked by a Muslim Brotherhood rally, resulting in more than 30 confirmed dead and over a thousand injured so far.

What I don’t get are all the rumors from all the external mainstream media about how the Egyptian army is creating a danger zone. The international press seem to be trying to make it sound like the military is the attacker, even though the Muslim Brotherhood is obviously the aggressor here.

The Muslim Brotherhood is a sore loser.They point to the election as proof of their legitimacy, but they overlook the fact that the legitimacy of any elected representative of the people comes from the people. When the people elect a person, that doesn't mean it is a lifetime vote. In a true democracy, it doesn't even mean that the person can stay in that position till the end of the term, if public opinion turns a different way.

Egypt may not have a formal recall process for elected officials yet, but thanks to the intervention of the military, the people can still make their voices heard when those who are in power are not meeting the needs of the country.

The people elected Morsi, yes, after waiting through a year of no political progress and in a total leadership vacuum. But the people who elected him can say we don’t want you anymore. Just because the cook delivered a bad meal, that doesn't mean we have to eat it too.

The Egyptian military understood that, and stood by the Egyptian people against an elected president who failed to gain the support of the people.