Civil War Propaganda in the Making

I woke up today to terrible news. Forty people were killed by the military in front of the Republican Guard headquarters.

However other news by the BBC included different details. They say the military attacked the unarmed protesters in the mosque at 4 AM today while they were praying. That seems odd to me, because by 3 AM the prayer is over and people are no longer in the mosque.

On the other hand, Al Jazeera had footage of people showing the camera empty bullet shells. Others showed unfired unused bullets. This is supposed to be evidence that unarmed people at prayer were attacked. But the bullets are easy to debunk; the empty shells fall off next to the shooter. If you are  in a protest where the police or the army is shooting at you, any empty bullet shells were probably fired by people standing next to you, not people firing at you. And they don’t fire unused bullets either; those have to come from somewhere else.

Another eyewitness who was awakened by the gunfire said that the whole thing took place in front of the Republican Guard headquarters on the street. the Muslim Brotherhood were trying to infiltrate the Republican Guard headquarters, and the military had to use force to get them out of there. So reports that it happened inside a mosque are very unlikely.

One of the famous people in the Muslim Brotherhood, a middle-aged woman named Oun Lymen, showed up on BBC Arabic to tell her side of the story. According to her she was raped for three hours by the military.

The news was bad to begin with. And it is being badly reported. 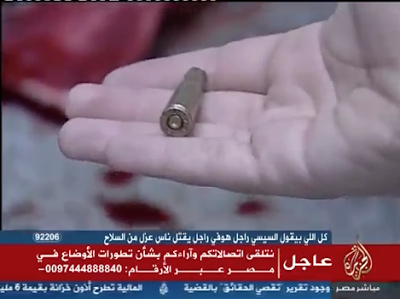