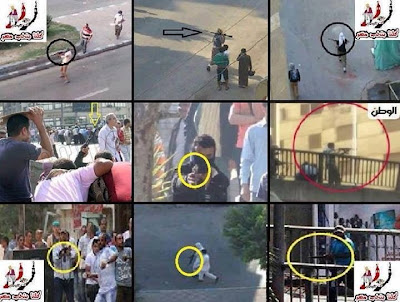 As we are watching the news and the images coming out of Egypt, and the death toll, you can see the contrast between the protests that ended Morsi’s regime and what has been going on since then.

The Muslim Brotherhood are adamant about fighting the will of the people. If they actually cared about legitimacy, they would have accepted the people’s decision to remove Morsi from office. On June 30th over 33 million of people walked out to participate peacefully in a rally asking Morsi to resign. That is more than the total number of people who voted for Morsi, and far more than have participated in protests calling for his return to office.

I understand that the Muslim Brotherhood won all elections that followed the toppling of Mubarak, and Morsi governed the country for a year. But we cannot ignore the fact that Morsi’s regime ended because of mammoth rallies and overwhelming popular opinion denouncing his rule as incompetent and partisan.

Now we are seeing Morsi supporters being used as pawns in a pointless fight. I do respect their right to protest, but you have to pick your battles. It is obvious that the Muslim Brotherhood has lost the people’s trust and sympathy.

We are left now with a group who prey on the Egyptian people’s love of their religion, and their lack of awareness about the political issues. They carelessly put these faithful followers in harm’s way, and encourage them to engage in illegal acts, such as burning churches, attacking the armed forces, and defying the military. The direct result of this behavior is that Egypt is now under emergency law again, despite the all the hard work Egyptian activists did to get it overturned in 2012.

I don’t endorse violence against civilians who are protesting for a cause they believe in. But when the Muslim Brotherhood members protest with guns and torches, I need my local authorities to take action to protect the rest of the people. Because now we are not talking about a peaceful protest or sit-in, we are talking about a terrorist organization taking to the street with assault weapons to harm civilians and challenge the authorities.

The Muslim Brotherhood chants about peace during their protests, however their protests have been anything but peaceful. Protesters used women and children as shields, and some had machine guns. Snipers maimed security forces from the tops of buildings. More than a dozen churches were attacked and burned on a single day by Morsi supporters.

It seems like the Muslim Brotherhood has declared war against Egypt, and is using terrorist tactics to foil the country’s aim of forming a secular democratic civil state. They have been seen burning churches, schools, and museums, randomly firing on and killing civilians sitting in their homes, burning public and private property, and targeting government buildings and police stations. These are all are clear forms of  terrorism.

What we have in Egypt right now isn’t a civil war; it is is civil unrest. In a civil war you generally see a divided military, but that hasn’t happened here. On the contrary, the unified military is very popular in Egypt right now, and the police as well. We have even seen regular civilians forming vigilante groups to defend their neighborhoods against attacks from the Muslim Brotherhood rallies.

The Muslim Brotherhood failed to impose a Taliban-like state in Egypt. The vast majority of Egyptians are more moderate muslims, and are opposed to such an idea. The misconception here that all Egyptians are in the streets protesting. The truth is the people protesting on the streets of Egypt are only the Muslim Brotherhood followers and supporters, and their popularity is getting weaker by the day.