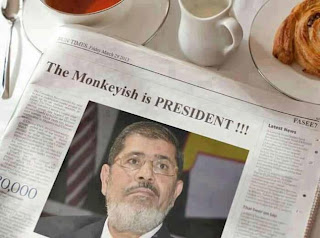 An interviewer today asked me what I thought were the biggest issues for Egypt. So I gave it some thought, and here's what I came up with.

One big issue in Egypt is that people don't read. I don't mean the people who can't read or write. I'm talking about people who have degrees from colleges, university graduates and lower. People in Egypt watch TV, and believe whatever they see because they have no experience judging the honesty of the media.

The perfect example is our president. He is highly educated, but unfortunately he seems to ignore the advice he gets, and he hates to be criticized. Informed people want feedback from every source, so they can judge it objectively. But Morsi is taking the country deeper into depression, inflation, and economic hardship. Morsi listens only to people from his Freedom and Justice Party.

Another issue is that Egyptians are very attached to their religion, even if they don't practice at all. Even worse, many people vote based on the fact that a candidate claims to be religious, but they never bother to find out if what he actually does is consistent with the teachings of the religion. They vote according to how Ikhwan advises them, not according to the actual religion. So they are easily manipulated.

They did trust the Islamists, and gave them their vote once, twice, and three times. The last referendum on the new constitution was especially hard for me. Morsi pushed through a constitution that was slapped together in less than 48 hours, with all its problems, despite public protests.

I did an interview with a sheik, and he promised me that if Morsi ran again in the presidential election today, even though all the people have complained about him, he would be elected again. And if the people just vote for the party based on having the same religion, and not for their own real interests, I'm afraid it might be true.

Egyptians need to learn to read more critically. The key to a democracy is an informed public. Egyptians need more experience analyzing the truth of what they read.
Posted by Unknown at 3:17 PM