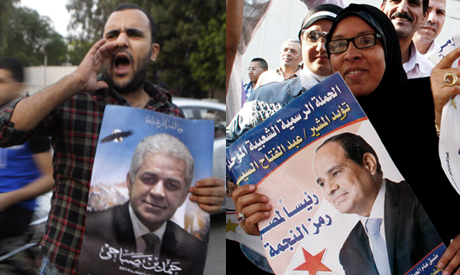 
The decision to boycott the presidential election very much depends on whom you ask. People from the  Muslim Brotherhood who support Morsi believe that his ousting was a coup, and they still believe that Morsi is the president of Egypt.


On the other hand most activists don't see that the election is going to change much in Egyptian politics. It is just an election like other elections we have had since the removal of Mubarak in 2011. This election is designed to give control to another ex-military man who believes that freedom of speech is not necessary right now, and it might hurt the country.


However I boycott the election because I don’t see any sign of change. I also think that this election is forcing every Egyptian to choose between the bad and the worst; by the worst I mean former army chief Abdel-Fattah El-Sisi.


I know that sometimes you don’t get what you want, but we have been getting the bad end of the bargain all the time. Therefore we have to demand change and we have to get our voices heard.


People didn’t sacrificed their lives during the uprising so former army chief Abdel-Fattah El-Sisi could become the president of Egypt. They lost their life seeking change and democracy. However we are too far away from that goal.
Posted by Unknown at 10:08 PM