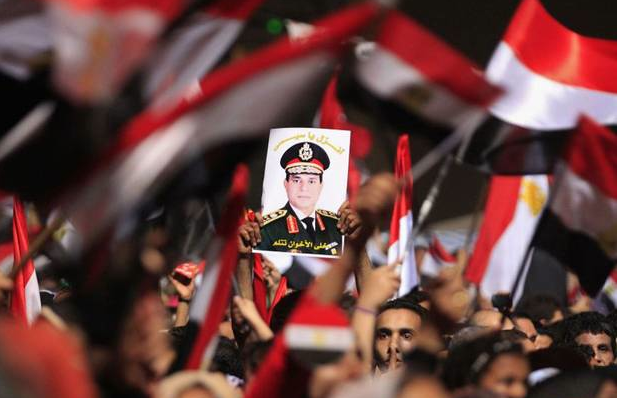 Many people think the idea of Abdelfattah El Sisi running for president is a great idea, and that it might bring the stability and security that Egypt needs right now. Among the supporters of Sisi running for president is Omer Musa, who used to work for Mubarak's government, and many other Mubarak cronies. Why do they support Sisi's canadcy? Because they are used to the system of corruption from Mubarak's era and they hope that it might come back if Sisi becomes the president.


I think that having another military man running the country is a huge step back. Not only would Sisi follow in the footsteps of Nasser, Sadat, and Mubarak, his retaliation will go a lot farther than detaining activists, or locking up the Muslim Brotherhood. He will have nothing to stop him from keeping the whole country in a state of submission.


Despite the the history of military violence against the protesters and the Muslim Brotherhood right after removing first Mubarak and Morsi, I have been hearing many talk on Egyptian and international media about the possibility of Sisi running as a presidential candidate in 2014. Not only has his candidacy been occupying people's minds, it is also a hot topic among activists who have experienced the rule of the Supreme Council of the Armed Forces “SCAF” in 2011 to 2012, which resulted many deaths and detentions for activists.


The idea of Sisi running is unpopular among activists because it means that all their hard work, and the people who died since the initial revolution, will have been for nothing. Everyone understands that if Sisi runs he will become the president no matter who is running against him. Sisi’s winning will mean one thing; that he will have absolute power. Really think about it. The military already has control over the economy and the weapons.


After removing Morsi, the military provided Egypt with better security than they had experienced since Mubarak, or during Morsi's one year presidency. Sisi captured most if not all Muslim Brotherhood heads, after giving them a chance to show their true skin by inciting violence and protesting endlessly until Egyptians were sick and tired of the Muslim Brotherhood and their sore loser strategies.


On the other hand, I don’t think that the military was behind the lake of the security during Morsi's presidency. But they witnessed it and didn’t do anything to stop it. Which makes it obvious that the military's strategy for allowing the rule of the Muslim Brotherhood was to let them fail, and turn the public opinion against them. I’m not saying that the Muslim Brotherhood would have succeeded if there were security in place, but it would have made it harder to get rid of them.


The reason why I think that Muslim Brotherhood would have failed anyway is that they had no vision. All that Morsi and the supreme leader of Muslim Brotherhood wanted was to have greater control of Egypt, and to install Muslim Brotherhood members in the government to replace the representatives of the Mubarak regime. They had complete disregard to the people needs.


Not only did the Muslim Brotherhood have no vision to rule the country, but they allowed the fact that they were the winners of two elections consecutively to cloud their judgment, so they turned a blind eye to the people who elected them in the first place.


I’m glad they are gone, and no longer ruling Egypt. And I’m specifically happy that what they did during the time of Morsi may have ruined their chances of ever being elected again.


However now Egypt has to face the harsh reality that there's nobody worth voting for when it comes to President. Egyptians are longing for someone like Nasser to come and rule the country, and rally people around him. Unfortunately we don’t have such a person.


On Monday Sisi met with a group of representatives from Congress, and I have to wonder why. I do think Sisi might be smarter than the average military leader, but I still think it will be the worst thing for him and the country if he runs for president.
Posted by Unknown at 4:08 PM